How Can You Do Vape Rings, Os and Other Tricks? 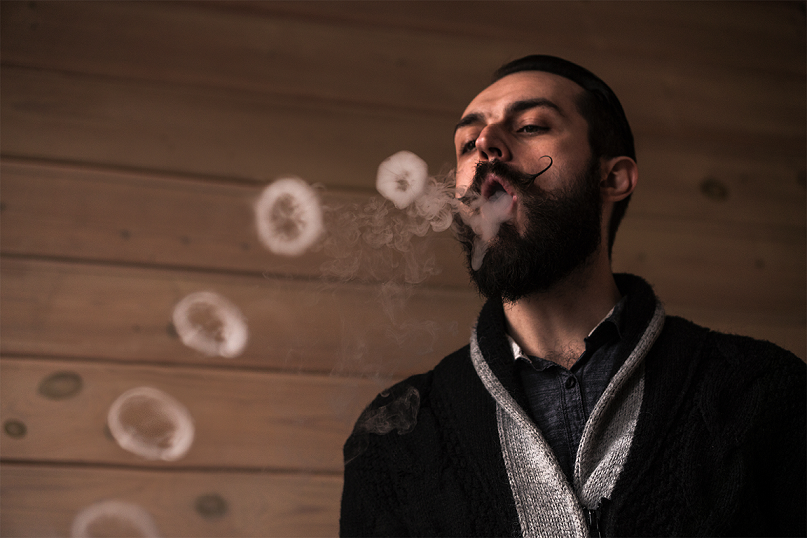 Smoking, even before vape came along, was always sold as something “cool.” The most interesting characters in movies and books, back in the 20th Century, could often be caught with a cigarette in hands, inhaling or even (like James Dean) with one waiting in the back of the ear. Therefore, it is no wonder that smoke tricks were also part of the act then, and still are today. Here are some vape smoke tricks you can do to impress your friends.

Vapers Enjoy Smoking Tricks as much as Smokers

Picture that beautiful “O”, a ring of smoke rising up, before it finally dissolves into thin air. There is definitely a sense of beauty to it, and that is why smokers and vapers of all time, younger and older, have always enjoyed puffing them out, as beautifully as possible. However, it is true that vapers seem even more into it than their predecessors. There is a reason for that: The smoke that vaping produces is thicker than the one coming out from cigarettes. That makes it easier to create beautiful and thicker rings of smokes, which also lasts longer. But “O’s” are only one of the tricks you can do with vape smoke. And if you are a vaper, why wouldn’t you want to make it more fun by realising such tricks, even if just for your own pleasure.

The basic trick is the ring, which you can adapt in many different ways. To do so, you will need to retain as much vapour as possible inside your lungs, which at the beginning could be quite challenging. But once of you have been into vaping for a long time, this will come easy to you. Otherwise, expect some coughing and choking at the beginning. Are you ready to start impressing everyone? Let’s discuss the various tricks you can learn.

How to make Beautiful Vape Rings and O’s

People who have taken the habit of vaping, usually like to change e-liquid flavours. Unlike cigarettes, there are plenty of different ones that can be tried until you find the flavours that really please you. Also, unlike cigarettes, they don’t contain tar, which can be really hurtful to your health in general, but mostly to your lungs. This is important since to do the vape tricks you will have to hold on to as much vapour as you can, inside them.

So, first, hold the vapour inside your lungs and get ready to release it slowly into the air. The secret is to make an “O” shape with your lips and your mouth before you let go of the vapour. That is when the technique becomes important. You need to let the air inside you come out by little shots. It should feel like a “toc” sound coming from your throat? One shot of air should create one “O.” Open and close your mouth to let them out. If you do this rapidly and in a successive manner, you can do double or triple “O’s.” And if you are able to elongate your lips, in width, then your rings can take the shape of doughnuts as well.

Here are three more tricks that you can learn. Like the ones we mentioned before, the best way to learn them is with someone that knows how to produce them. Otherwise, it might be very difficult for you to understand what you are doing wrong, and to adjust accordingly.

This is the most popular trick with all vapers. It recalls the ghost people in movies, as they breathe, in and out, a cold wave. To make it work, keep as much vapour inside your lungs as possible. Then, release it slowly and without pushing hard, in a constant stream. As it comes out, inhale it back inside before releasing it and taking it inside you again and again.

It is one of the easiest tricks in the book, since you don’t have to inhale the vapour inside you. You just need to take in as much vapour as you can into your mouth and keep it there. Once you are ready, only open the corner of your lips and then push the vapour outside with force. It will come out from your nose and the corner of your lips, and you will look like a fire-breathing dragon.

If you have seen this one on YouTube, be aware that some people edit their videos for you to think that the vapour coming out of their mouth is coloured. However, it is true that you can find a vape mod with LEDs that light the vapor as it comes out, thanks to a small beam of coloured light.

When you get passed the first stages, you will be able to do other tricks like the French inhale, the waterfall, and the bane inhale. But starting with these tricks will give you the practice you need, to then move forward onto others.